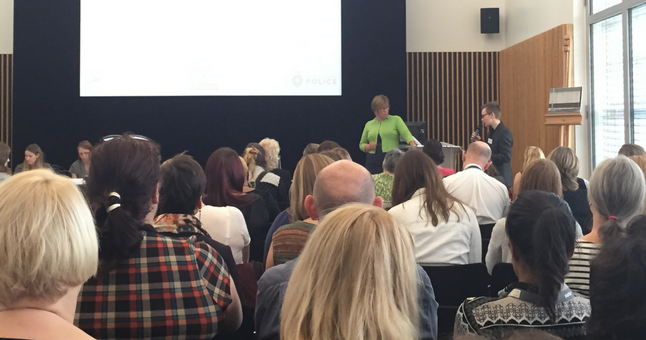 The Safer for Women summit took place at Nottingham Conference Centre this week, and involved discussion about the importance of tackling misogyny and sexual harassment, and outlined the encouraging progress in Nottingham so far with plans to continue to make Nottinghamshire a safer place for women. The event was well attended by various local organisations, stakeholders and individuals, including Equation. Interested in the wider conversation around the conference? Check out the #nottacompliment hashtag on Twitter. 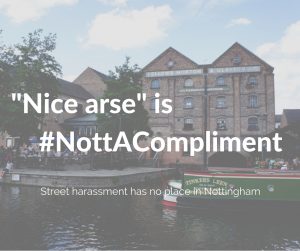 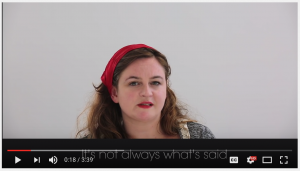 A powerful video titled ‘Because I am a Woman’ was then presented; featuring women sharing their own experiences of sexual harassment to raise awareness of misogyny hate crime. You can watch the video here.

Joined by Melanie Jeffs, Centre Manager at Nottingham Women’s Centre, Sue addressed the existing misconception that women should just ignore sexual harassment: that it is ‘normal’ and simply a part of daily life. Mel added that there is still a lack of awareness that women can (and should) report incidents of sexual harassment to the police; she spoke of women asking “what’s the number?” which illustrates how women are made to feel as though sexual harassment is trivial and a lesser crime to any other. Sue spoke about new training for police and call-centres, to ensure that those who report incidents of misogyny hate crime receive the proper support and are reassured that they will be taken seriously. 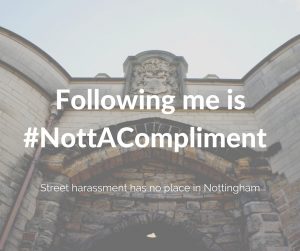 Sam Smethers from the Fawcett Society presented the national perspective, beginning with centuries of attitudes undermining women that are embedded in society and culture. She shared the findings from a focus group of 18-24 year olds, who said they don’t seek punitive change; they want men to be taught to change their attitudes and behaviours.

Sam said too often it is left up to the individual to handle incidents, and she said it is about time that social media platforms took more responsibility and action against incidents of online harassment. She said, “It’s up to the man to determine what he thinks is acceptance, rather than the woman’s decision in how it affected her” and it’s about time that changed. 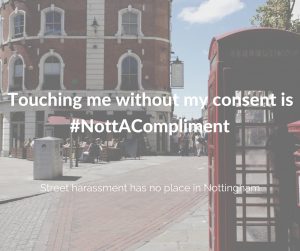 Laura Bates, founder of the Everyday Sexism Project, shared her profound evidence base including testimonies from women who had been groped on public transport, felt too intimidated to go jogging, intentionally wore their hair up to make it difficult to grab, and were made to feel as though they were making a fuss about nothing. Comparing her experience of walking down the street to that of her husband, Laura drew attention to the real lack of awareness of men who are not subject to the harassment that over a third of all women experience. Laura powerfully expressed her concerns with the fact that women can experience these levels of abuse and yet still consider themselves “lucky”.

Referring to street harassment as a spectrum, Laura commented on how it is ‘deliberately misunderstood’ to mean wolf whistling, which she said should not be dismissed as minor as it can often escalate to worse offences. She showed that there is a “knock-on impact on the treatment of women in other spheres as well”, and just as rape is about power and control, so too is street harassment. 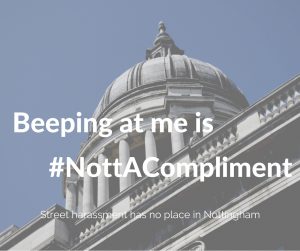 The afternoon was filled with a series of short presentations addressing the wider areas of concern. Zahra Butt, Director of Box Smart, shared her personal experiences of misogyny as a Muslim woman, speaking of the pressures and expectations of women to behave a certain way, and the negative reactions she often receives when people learn that she is a boxing coach. Dr Irene Zempi, Director of the Nottingham Centre for Bias, Prejudice & Hate Crime outlined the assumption that veiled women are easy targets due to expecting Muslim women to be submissive, and shared cases of Muslim women experiencing both racist and sexual harassment. She stated that for a Muslim woman, having her headscarf or hijab pulled off is a form of sexual assault that should not be tolerated.

Rachel Harding and Kendall Newbold from NTU, and Rachel’s daughter Ruth, gave an interesting delivery on how children experience and understand street harassment. They shared their research findings, and warned that street harassment of children is sometimes part of a grooming process so it is crucial that children are taught to report incidents. 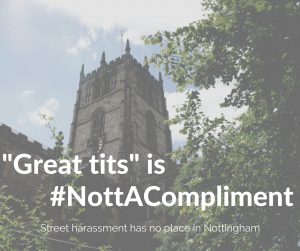 The day closed with Mark Simmons, Student Community Liaison Manager at NTU, outlining the on-going work at NTU including the ‘Respect and Consent Initiative’, #TrentGirlsCan campaign and the Cup of Tea metaphor. He said, “I am proud to say there’s been an increase in reported incidents because it means people are getting it”, showing there’s been a step forward in increasing confidence to report incidents of misogyny hate crime.

Mel and Sue will be presenting in the Houses of Parliament next month for Nottingham in Parliament Day, and their work has already received recognition by MPs, with Teresa May also expressing her interest.

In an emergency, always call the police on 999

Non-emergencies can be reported via 101