If you’re being hurt, intimidated or controlled by someone you love,
you’re not alone.

Having worked with male survivors in Nottingham/shire for over 7 years we’ve learned that many men often don’t realise that what they’re experiencing is domestic abuse, and many more feel unable to speak out. #SupportNotSilence raises awareness of domestic abuse towards men in all its forms and hopes to encourage more men to seek support. There is help, and there is hope to lead a life free from abuse.

“Domestic abuse” is behaviour that someone uses in a relationship to deliberately dominate, threaten, coerce and control someone else. Domestic abuse can include physical violence, as well as emotional and psychological bullying, sexual violence or financial control and abuse.

Any person can be a victim of this kind of behaviour whether they are a man, woman or another gender identity. Domestic abuse against men is perpetrated by both men and women, as well as people of other gender identities.  Men can experience domestic abuse from a partner or a former partner in heterosexual or same-sex relationships. Men can also be abused by family members: adult children, siblings or others. Family abuse against men includes so-called ‘honour’-based abuse, such as forced marriage.

Men who experience domestic violence and abuse are not to blame, no matter what the perpetrator of the abuse may say. Men who are being abused may feel ashamed or afraid of judgment by others, but it does not make a man ‘weak’ or less ‘manly’ if they experience abuse.

Men who experience domestic abuse are not alone and it is always okay to ask for help.

Do you need help or advice?

Equation’s service in Nottingham/shire offers free support for men experiencing domestic abuse. The service can advise men about their safety and legal options and signpost to other services including drugs and alcohol support, housing and counselling.

Who we can support:

“I was able to take back control of my life having received support from Equation.  I feel more independent and for once in a very long time I feel more in control. Talking to you gave me a safe space”

Men outside Nottingham/shire can call:

Find out more about
Equation’s Service for Men

How You Can Support
#SupportNotSilence

Do you work, live or play somewhere people may see our promotional posters? Why not order some for free?

With your help we could do even more with our campaigns such as running them more times a year, reaching more people, and regularly refreshing the content to keep it current.

Know where to get support

There’s lots of fun and easy ways you can raise funds to support our campaigns. 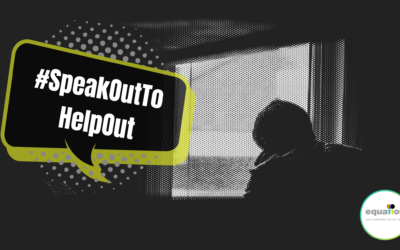 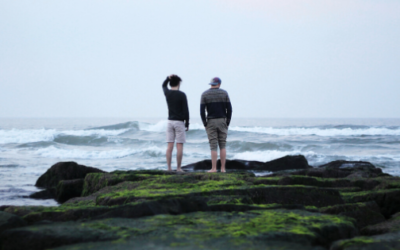 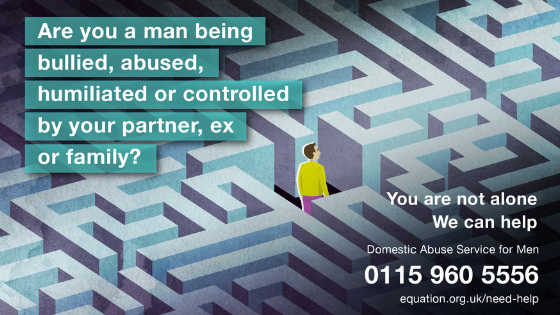 We all know that domestic violence and abuse is a huge problem in our society, but do many of us understand how this issue affects men?   It can be hard to find reliable information about the topic, so Equation’s experts from our Domestic Abuse Service for Men have...

Learn to recognise the signs of domestic abuse

Want to know more, get involved in our Support Not Silence campaign? Use the form below to get in touch.

Stay Up To Date

Get all the important news about upcoming training courses, updates on best practice guidelines and the latest resources for supporting people experiencing domestic abuse.

Check out our other campaigns

Check out our award-winning ‘Help A Friend’ campaign.

Join our team of ambassadors to support our campaigns on social media.